Many readers have been asking why I haven’t written much about My Little Pwdin lately and, I’ll be totally honest, it’s because things have been, to use the accepted term, challenging. Closer to the truth is to say it’s been a bit of a nightmare recently. Developmentally, things seem to have stalled in some areas and gone backwards in others. Physically, the boy is coming on in leaps and bounds.

Pwdin has had a growth spurt and a concomitant strength spurt. His gouging at my boobs, neck and face, although not in anyway aggressive, have become very determined and increased in force and he has recently taken to pinching very, very hard. I spend most of my time with the Pwd in my pyjamas or old clothes as he will stretch and tear whatever I’m wearing to get a handful of flesh. Thankfully, he seems to have stopped biting when we are trying to get him in his buggy or car seat but then, I think that’s because his kicking and bucking more than suffice to impede our progress. We have reached the point where taking Pwdin anywhere is a two person job.

With his increased size and strength, it’s a breeze to push furniture around and my not very little Pwdin has taken to diving over the units separating the kitchen from the dining room and into the kitchen. We chose this house because we loved this open plan area but now, we are going to have to put a wall between the two rooms. The legs have been sawed off Pwd’s bed as his bouncing on it was turning into diving off it and now this is the only piece of furniture in his room. Oh, and the poo painting has resumed and he’s not consistent with his chewing anymore.

Though it might sound like Pwdin’s exploits are driving me crazy, it’s the boy who keeps me sane. He is bigger and stronger but that makes his hugs bigger and cwtchier too. As well as the gouging he’s big into giving kisses. There’s nothing I can’t forgive when he comes over and squishes his cheek against mine (even if he is hanging on to my hair). He is, and always has been, a very loving little boy.

No matter how difficult his behaviour might be I would never want to be without my Pwdin. That’s why the events of last week were so terrifying. I had planned on naming the company involved but as I have had nothing but the most courteous and attentive response to my complaint from the very highest of places I will only refer to them as the Utility Company. To tell the story, here is a redacted copy of my complaint:

… Yesterday, due to the carelessness of [an individual working on behalf of the Utility Company] I could have lost my three year old son forever.
My child is severely autistic, has three words he uses infrequently and inconsistently and understands no language whatsoever – not even his own name. A [contractor’s employee] came to our home and though he appeared to shut the porch and front doors behind him, neither were closed firmly and my boy, [Pwdin], exited the house alone. I was assisting the meter reader and believed my son to be in the lounge.
When the [gentleman] left, I went to attend to my child but he was gone. Frantic, I phoned the police and flagged down a passing motorist (there was no one in the street) and asked him to stay outside my house until the police came while I searched…for [Pwdin]. I alerted anyone and everyone I saw and two young men took to their car and set about searching for him as did a few other neighbours. After about thirty minutes, though, it seemed infinitely longer, those two young men returned my child to me totally unscathed.
[The] operative was aware that a child was in the house … [Pwdin’s] behaviour is by no means typical of an almost four year old, so, it would surprise me if it wasn’t obvious that this child was disabled. Your operative also made a comment, the exact words of which I do not recollect, to the effect that he was concerned our small dog would get out as he entered my home.

The number one cause of death of autistic people under the age of 18 is accidents that occur from wandering off, most commonly drowning. Of course my hubby and I have gone to great, sometimes excessive, lengths to ensure our home is safe and secure for our beautiful boy. Pwdin is a fast, fit and healthy little man with boundless energy and covered quite a distance very quickly – he was found playing in gravel in a front garden some way up the street. Though very able bodied, Pwdin’s mental capacity is estimated to be, on average, akin to that of an eight to nine month old baby. He has no road sense, sense of direction, sense of danger nor receptive language. The awful potential consequences of him being in the street alone were the visions going through my mind as I frantically searched for my boy, all the time on the phone to the police.
Pwdin was found by two young men who I’d alerted to his disappearance. They jumped into their car and searched the neighbourhood for him. The very fact that two strangers could lead Pwdin to and put him in their car with no resistance is testament to how vulnerable a little boy he is and multiplies the “what ifs” in my mind. Thankfully, those two young men, to whom I owe so very much, had only the intention of bringing my boy back home. They are heroes to me.
I hope, very much, that the Utility Company in question, who are fully investigating, will look at procedures of the companies to whom they contract various operations and have them look at their standards for customer safety. This isn’t just a matter that affects families and people with autism but any with young children as well as those looking after people with dementia who are also liable to wander. The terrors of those frantic thirty odd minutes are emotions that I would not wish anybody to experience. I’m so grateful that I have my boy back to paint his room in poo, gouge me, chew my phone, tear up my floors and bite the dog. I don’t think I ever held him as tightly as I did that afternoon. 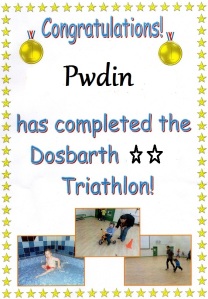 Pwdin’s speed and stamina were put to good use in a sponsored triathlon. His class often go out on trips and because, like Pwdin, many are “flight risks” and too big for average buggies the class is trying to raise money for some new, special needs ones. I’m not sure just how much has been raised so far but thanks to everyone who sponsored our little athlete and helped him raise over £70.

After pretty much growing a mullet the boy’s got a haircut and his Daddy and I have no bruises or broken bones to show for it. Pwd’s beautiful golden hair was getting more than a bit girly. He hates having his hair cut with a passion and each attempt we’ve made be it with scissors, electric clippers or thinning combs met with tantrums, kicking, screaming and tears all round. However, a member of staff at his school managed to get the job done for us. He looks lush!